1. A 120-year-old Hindu monk named Swami Sivananda says the key to his long life has been daily yoga and a vow of celibacy. Luckily, when you’re celibate, being very flexible comes in handy.

2. KFC is now licensed to sell marijuana in its Canadian stores. Not to be outdone, this guy will sell you an eight-ball: 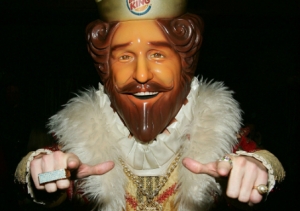 3. According to reports, ‘Dancing with the Stars’ wants former President Bill Clinton to compete on the show. Said Bill, “That’s nice, but did ‘The Bachelor’ call?”

4. Egypt’s state-run television has suspended eight of its female presenters for being overweight. They were so overweight Roger Ailes could barely hit on them.

5. A young boy accidentally ate his dog’s chew toy and now squeaks whenever he talks. Or, as Kristin Chenoweth refers to it, a career.

6. Researchers have developed a map comparing the average breast sizes of women from all around the world. Even more impressive, it’s a topographical map.

7. Last week, residents of Rio de Janeiro spotted a severed leg floating in the water just a few miles from Olympics sailing events. So now, Oscar Pistorius is really mad about missing these games. They’re just giving away legs over there.

8. The creator of the TV series “Homeland” said the president in the show’s next season is part Donald Trump and part Hillary Clinton. He said viewers will be able to easily determine which features and characteristics are drawn from which candidate, except for the fictional president’s small, delicate, feminine hands.

9. On Saturday, Actor Robert De Niro said that Republican presidential candidate Donald Trump should not run for president because he was “totally nuts”. Said Trump, “You talkin’ to me?”

10. New leaked footage has emerged alleging showing actor Johnny Depp throwing a wine glass at his ex-wife Amber Heard. And, in an even worse show of spousal abuse, additional videos show Depp making Heard go to the premiere of all his movies.