1. This week McDonald’s announced that it will sell a limited edition six-pack of candles that smell like Quarter Pounder ingredients including ketchup, pickles, cheese, onion and beef. So, your move, Gwyneth Paltrow’s vagina.

2. A man in Wisconsin was arrested last week for allegedly stealing chicken wings and condoms from a Walmart. He was either planning one hell of a night or I’ve been eating chicken wings wrong.

3. Officials at a library in California are upset after recently discovering that an adult film was shot in the building. And if they’re upset by that, maybe they shouldn’t check the library computer’s search history.

4. Last week, a U.K. patient underwent brain surgery while playing a violin. Look, if I want to listen to a musician with a brain injury play an instrument, I’d go to a Ted Nugent concert.

5. This week, Democratic presidential candidate Mike Bloomberg revealed, that even though his mother passed away several years ago at the age of 102, he still pays for her home’s phone line so he can call and hear her voice on the answering machine. Because nothing’s more relatable with today’s electorate than needless expenses and landlines.

6. This week, Democratic presidential candidate Mike Bloomberg revealed, that even though his mother passed away several years ago at the age of 102, he still pays for her home’s phone line so he can call and hear her voice on the answering machine. He’s also opened up a quaint bed and breakfast with her as well: 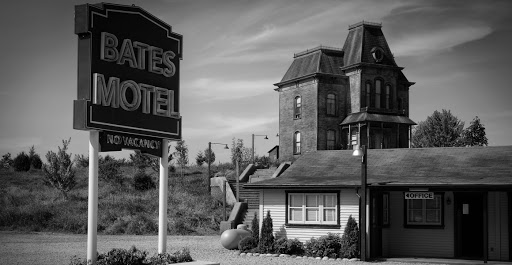 7. According to reports, former Hollywood producer Harvey Weinstein was in good spirits on Tuesday, as he accepted visitors at a Manhattan hospital, despite having been convicted a day earlier of sexual assault and rape. Said an elated Weinstein, “All I have to do is press this button and legally the nurse has to give me a sponge bath.”

8. A soccer player in France has been suspended for five years after biting the penis of an opponent during an altercation after a match. He was also given a red card for using his hands to cup the balls.

9. It was reported this week that Steven Spielberg’s daughter Mikaela is making pornographic movies. “Oh God, that’s awful. Why would anyone put that on film?” said people after watching ‘Indiana Jones and the Crystal Skull.’

10. According to a new study, erectile dysfunction pills can permanently distort one’s vision. “His or mine?” said a very hopeful Melania.

11. Three dolphins have been shot or stabbed in Florida since May. Police have named their top suspect, a Ray Finkle:

12. During a rally, President Donald Trump ridiculed South Korean film “Parasite” winning the Best Picture Oscar, telling a campaign rally he wished for the return of Hollywood classics like “Gone with the Wind.” And you know Trump really hated that movie if he’s taking the side of wind:

13. On Wednesday, the Broadway play “To Kill a Mockingbird” was performed at Madison Square Garden for 18,000 public school students. “Oh, thank God!” said the students once they realized they were watching a three-hour long play based on a book written in the 1950s about race relations and not the Knicks.

14. Disney has announced a new partnership with the plant-based meat company Impossible Foods to offer the Impossible Burger at their resorts and parks. “Just in time,” said Eeyore:

15. A man in Florida was recently arrested at an IHOP restaurant for allegedly asking customers if they wanted to see his genitals. “But I asked this time?!?!?!” said a very confused Louis CK.

16. Despite potentially facing more than two decades in prison, Harvey Weinstein is “not giving up on life,” according to his spokesman. “Man, this guy really is bad at taking ‘No’ for an answer,” said Life.

17. Doctors are warning that putting potatoes up your butt won’t cure hemorrhoids. So I guess it was something else that cured my hemorrhoids.

18. This week, President Trump appointed Vice President Mike Pence to lead the federal task force to get to the bottom of the coronavirus. And, in future news, the coronavirus is caused by gays.

19. According to a spokesman, after his conviction, Harvey Weinstein is going “stir crazy” sitting in his hospital room. But, in Weinstein defense, you’d be pretty stir crazy too if you were trapped in a room with just Harvey Weinstein.