1. President Trump signaled once again on Tuesday that he wants to create a new branch of the U.S. military called “the Space Force” dedicated to fighting in outer space. And I have a pretty good guess who the first person drafted into the Space Force will be:

2. On Thursday, a judge ruled that a New York condo can take the T-R-U-M-P letters off its facade. This marks the first time that Melania has been jealous of a building.

3. According to a new study, one in four Americans said they would have sex with a robot at least once just to try it. “Unfortunately, due to my religious beliefs, I had to marry the robot first,” said Karen Pence.

4. Authorities have rescued a cat seen wandering around New York City’s Kennedy Airpot for over a week. Stuck in the same airport for a week, either that cat was lost or flying United.

5. On Tuesday, Donald Trump’s longtime personal physician, Dr. Harold Bernstein said the letter he wrote in 2015 stating that Trump will “unequivocally, will be the healthiest individual ever elected to the presidency” was dictated word-for-word to him by the President. That hard-to-believe story again, Trump knows the word ‘unequivocally.’

6. A California man who police say was drunk and hungry broke into a Taco Bell in the middle of the night and ate taco ingredients. Crazy to think that breaking into a store was only the second worst decision that guy made that night.

7. In a recent interview, President Trump said NBC should be nicer to him because he, “made them a fortune.” Under the theory, so should the gamblers of Atlantic City:

8. On Thursday, people jumped out of their cars on an Indiana highway to scoop up $600,000 in cash that fell out of a Brink’s truck. Said one motorist, “I never thought I’d see that much money in my life unless I won the lottery or told Michael Cohen that I slept with Trump.”

9. Twitter urged its more than 330 million users to change their passwords after a glitch caused some to be stored in readable text. Twitter is also urging others just to forget their password all-together:

10. On Friday, Swedish pop band ABBA announced that they have recorded new music for the first time since 1982. And, I think I speak for everyone when I say, don’t get any ideas Spice Girls.

11. North Korean leader Kim Jong Un will shut down his nuclear test site in May and invite experts from South Korea and the United States into the country to ensure its closure. Said President Trump, “If I wanted to see a shuttered building, I just go to one of my businesses.”

12. After being bitten by a shark last week, a Colorado man achieved the rare distinction of being attacked by a shark, bear and rattlesnake all within the last four years. “Get the hint, asshole,” said Mother Nature.

13. Gold and diamond companies are joining with IBM to develop blockchain technology to track the origin of jewelry and ensure it is ethically sourced. Although, in some cases, determine the origin may be much simpler:

14. Boy band N’SYNC was honored on Monday with a star on the Hollywood Walk of Fame. Even better, Chris Kirkpatrick didn’t have to ask for the day off from work: 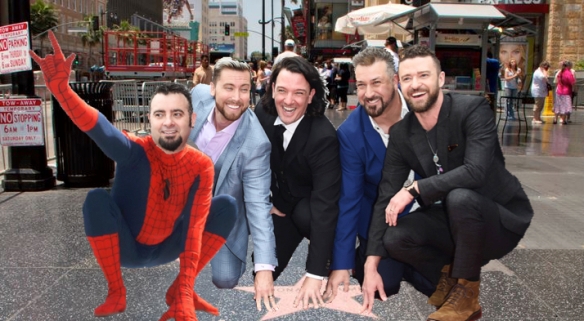 15. According to ‘The New York Times,’ Special Counsel Robert Mueller has a list of questions he wants to ask President Trump. Question number one, “How do you spell Special Counsel?”: