2. According to a soon-to-be released book, President Trump strips the linens off his own bed in the White House. Or, as it is known when he’s in Russia, destroying the evidence.

3. In response to Steve Bannon’s recent critical comments, President Trump said, “When [Bannon] was fired, he not only lost his job, he lost his mind.” And, according to Anthony Scaramucci, he also lost a few ribs:

4. According to excerpts from an upcoming tell-all book, First Lady Melania Trump didn’t want Donald to win the presidency, and cried on election night. But, to be fair, Melania cries most nights.

5. On Tuesday, Utah Senator Orinn Hatch announced that he is retiring after serving over four decades in Congress. Hopefully they’ll be able to find another old white guy somewhere in Utah to replace him.

6. Vin Diesel was the highest grossing actor of 2017. While Kevin Spacey was the gross-est.

7. According to Google, ‘Hurricane Irma’ and ‘Matt Lauer’ were among the top searched terms of 2017. Apparently people were interested in finding out more about a devastating event that ruined many peoples lives and Hurricane Irma.

8. On Monday, 400 fans braved 2-degree temperatures to greet the Bills at Buffalo Niagara International Airport after Buffalo beat Miami Sunday to clinch its first playoff berth in 17 years. Because nothing says celebration like leaving Miami for Buffalo in the middle of December.

10. Tuesday morning, NBC announced that longtime correspondent Hoda Kotb will permanently replace Matt Lauer as co-anchor of the ‘Today Show.’ Which means Hoda will leave her current role as co-host of the ‘Today Show’s’ fourth hour and co-host Kathie Lee will question if Hoda ever existed or was just a Chardonnay-fueled hallucination.

11. President Trump rang in the new year the same way he has for more than a decade, holding an opulent gala at his Mar-a-Lago club. While Melania also rang in the new year in her typical fashion, by being as far away from Donald as possible when the clock struck midnight

12. President Trump said on Monday the United States has “foolishly” handed Pakistan more than $33 billion in aid over the last 15 years while getting nothing in return. Which explains Trump’s new nickname for Pakistan, “Don Jr.”

14. According to new research, people who drink hot tea daily may be less likely to develop glaucoma symptoms. Which means the Queen smokes the ganj because she’s chill as fuck: 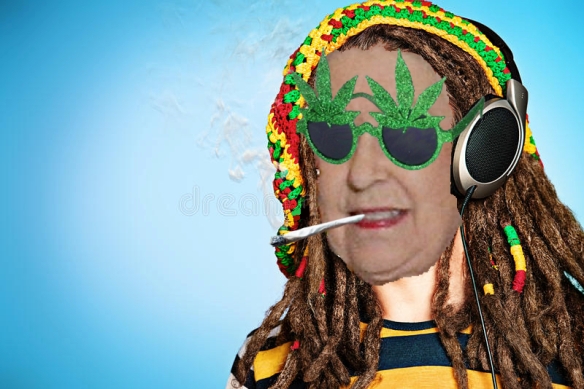 15. Boxer Mike Tyson is opening a marijuana resort on 40-acres of land in the remote Mojave Desert. A boxer with a notorious quick temper and an unlimited supply of mood altering drugs all taking place on a piece of land very far away from civilization, what could go wrong?