1. The U.S. will reportedly ban Americans from traveling to North Korea. That story again, Dennis Rodman will have to find a new way to desperately seek attention.

2. Over the weekend, actor Ben Affleck confirmed that he will continue to portray Batman in upcoming films. Which explains this recent photo: 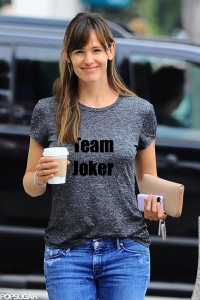 3. The legal Bunny Ranch brothel in Nevada has offered O.J. Simpson a job as a greeter. Of course, if he accepts, it won’t be the first time he’s in a room covered in other people’s DNA, allegedly.

6. While promoting his upcoming movie at Comic Con, actor Will Smith said seeing ‘Star Wars’ for the first time was better than having sex. Said fans in attendance dressed up as their favorite Star Wars character, “I guess we’ll just have to take your word for it.”

7. An angry pregnant wife in Vietnam attacked her cheating husband’s mistress by allegedly forcing red-hot chili peppers into her vagina. “Wow, the acoustics in here are great!” said the Red Hot Chili Peppers:

8. Police in San Francisco said a man was mugged and the two assailants made off with his ventriloquist dummy. Police are hoping to track down the muggers to thank them.

9. A 22-year-old named Fellony Hudson is accused of felony kidnapping, felony eluding and felony possession of a stolen car. And don’t even ask what his brother Sodomy Hudson is being charged with.

10. Kellyanne Conway said Sunday that CNN made a “business decision” to be “unfair” to President Trump. Just like Conway made a business decision to give that apple to Snow White.