1. Roger Ailes, the former head of Fox News, died yesterday at the age of 77. That story again, someone finally found the last horcrux.

2. Former president George W. Bush attended a Texas Rangers baseball game Wednesday evening and photobombed a reporter while she was live on TV. Then, after the photobomb, he just stood behind her for the rest of the report because he didn’t have a good exit strategy.

3. A British wing suit pilot will attempt to break four world record by skydiving from 42,000 feet. One of those records, word’s deadest man.

4. According to a new report, President Trump will give a speech on Islam when he visits Saudi Arabia later this month. Although, wouldn’t it be quicker if he just drew a picture of Mohammed?

5. A Florida woman recently filed a lawsuit in Mississippi against a Confederate group claiming that a camel named Sir Camelot bit her at the site of the Jefferson Davis Home and Presidential Library in Biloxi. And, still, the most surprising part of that story is that there’s a library in Mississippi.

6. According to a new report, President Trump doesn’t exercise because he believes it drains the body’s ‘finite’ energy resources. Man, that guy really doesn’t like gyms/Jims: 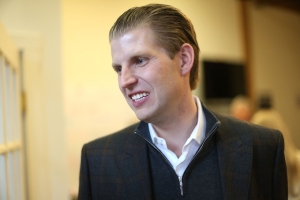 8. President Donald Trump said on Saturday he wants to move quickly to nominate a new FBI director to replace James Comey. But Trump will be forced to move slower if there are stairs involved.

9. The world’s heaviest man, who at one point weighed 1,300 pounds, has undergone successful gastric bypass surgery. Although the operating doctor hesitated to label anything that involved him seeing a 1,300-pound man naked ‘a success.’