1. In a new interview, President Trump appeared to waiver in his support for his chief strategist Steve Bannon. Which can only mean on thing, Trump has met a younger, hotter morbidly obese anti-semite who looks like he’s made of leprosy and bacon-cheeseburgers.

2. In a new interview, President Trump appeared to waiver in his support for his chief strategist Steve Bannon. If Trump fires Bannon he’ll have to find a new guy he can stand next to in order to look healthy by comparison.

3. On Tuesday night’s episode of “The O’Reilly Factor,” host Bill O’Reilly announced that he is going on a pre-planned vacation. “What a coincidence, us too!” said his sponsors.

4. Yesterday, while visiting an affordable housing complex in Miami, HUD Secretary Dr. Ben Carson got stuck in an elevator. Not to be outdone, Secretary of Energy Rick Perry has been stuck on a broken escalator for the past two weeks:

5. In a recent interview, President Trump revealed that he gave the final go-ahead to bomb Syria while eating chocolate cake with the President of China. Trump said it was the hardest decision thus far he’s had to make as President but ultimately he went with the chocolate cake.

6. In a recent interview, President Trump revealed that he gave the final go-ahead to bomb Syria while eating chocolate cake with the President of China. But, in Trump’s defense, there is a history of Presidents making huge geopolitical decisions over dessert:

7. Yesterday, when asked if recent events in Syria had changed his opinion on Putin, President Trump said, “Putin is the leader of Russia. Russia is a strong country.” To read more of President Trump’s statements you can refer to little Timmy Gilbert 3rd grade book report on Russia.

8. White House Press Secretary Sean Spicer said on Wednesday he had let down President Trump with his “inexcusable and reprehensible” comments concerning Adolf Hitler. But don’t worry Sean, Trump has ample experience in handling being let down: 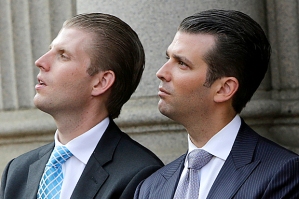 9. ‘Saturday Night Live’ is being accused of plagiarizing a sketch from noted comedian Tig Notaro. Even more damning, apparently Alec Baldwin has been pretending to be Donald Trump on SNL and quoting him word-for-word for weeks.

10. The day after White House Press Secretary Sean Spicer apologized over his inappropriate comment about Adolf Hitler, North Dakota Representative Kevin Cramer said Spicer’s comment is “not without some merit.” That story again, man waves down the Titanic to make sure it doesn’t leave without him.