1. On Monday, SpaceX CEO Elon Musk announced that his company will send two space tourists to the moon sometime late next year. “How are the schools there?” asked Melania.

2. President Trump recently said he believes that former-President Barack Obama is behind the leaks in his administration. Trump came to that conclusion when he realized he couldn’t blame everything on immigrants and Hillary.

3. Spain has appointed a ‘sex tsar’ to help boost the country’s low birthrate. We have a person in the U.S. that overseas massive increases in the nation’s birthrates too, we call him the commissioner of the NBA.

4. In a new interview that aired Tuesday morning, President Trump said he couldn’t think of a single time when he received deserved criticism. But, in Trump’s defense, maybe he means he can’t think of just one, SINGLE time.

5. Golfer Rory McIlroy said that his outing last week with President Donald Trump was not a political endorsement but rather “simply a round of golf.” Heavy stress on the ‘round’ part:

6. According to new research, if done correctly, sex uses all 657 muscles in the human body. Begging the question, why isn’t Tara Reid in better shape?

7. According to a new study, the chicken offered at Subway restaurants contain just 50% chicken DNA. Even worse, some sandwiches contain as much as 70% of Shawn’s DNA:

9. On Tuesday, swimmer Michael Phelps testified before Congress about doping reform. No word if the dope he was talking about were PEDs or Ryan Lochte: 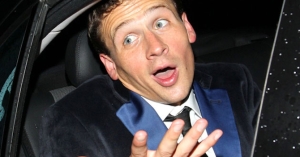 10. Actress Jennifer Garner said she is ready to work with President Trump and wants to “have a steak and a good chat” with him. She’s not worried about whether Trump will ruin America because she has experience with men ruining once great institutions: