1. According to reports, Hillary Clinton is working on a book about the 2017 presidential election. Although, I’m not sure writing “WHAT THE FUCK HAPPENED!!!” over and over again in a diary can technically be considered a book.

2. It was announced that Hillary Clinton will deliver the 2017 commencement speech at Wellesley College. She will tell the graduating seniors they can do anything they want to, just as long as a unqualified man with zero experience doesn’t want to do the exact same thing.

3. A high school choir teacher in Oklahoma has been arrested for indecent exposure after performing a cartwheel in front of an entire class of students while not wearing any underwear. In a related story, all the boys in that choir who were altos are now baritones.

4. Former president Barack Obama was spotted on vacation in the Caribbean this week wearing a backwards baseball hat and flip-flops. Not to be outdone, Joe Biden was spotted wearing his floaties:

5. Kim Kardashian and Chrissy Teigen announced on Thursday that they are starting a book club. No word on whether it will be coloring or pop-up.

6. A new dating app has debuted called Hater, that matches people based on things they both hate. So, now Donald Trump can actually call himself a uniter.

7. The White House said on Thursday, President Trump will honor an agreement with Australia to accept refugees although he is unhappy about the deal. It is the most begrudging ‘acceptance’ since Melania said “I do.”

8. During an interview this week, Kellyanne Conway compared Donald Trump to Jesus Christ. Because, even after a rough first week, much like Jesus, Donald will rise again, unless, of course, there are stairs involved.

9. According to reports, there is a secret code word for when President Trump is having sex in the White House. Well, it’s not so much a word as it is everyone just puking uncontrollably.

10. According to reports, President Trump is afraid of stairs. And it might be genetic, because Barron is understandably scared of steps:

11. Scientists have developed a brain-computer interface that reads the brain’s blood oxygen levels and enables communication by deciphering the thoughts of patients who are totally paralyzed and unable to talk. Although it is suspicious that every communication so far has been, “Please add these scientist to my will.”

12. The owner of the house in which Adolf Hitler was born is suing to keep the Austrian government from seizing and demolishing the property. They should probably think about getting rid of this one too:

14. According to reports, First Lady Melania Trump may not move into the White House at all. Man, Donald really doesn’t want a woman in the White House.

15. According to a new study, being naked makes us happier and more satisfied with our bodies. That’s what I told the judge, but I still can’t go within 300 feet of a school.

16. Masaya Nakamura, the man who founded the Japanese video game company behind ‘Pac-Man’, died over the weekend at the age of 91. Police have gathered up the usual suspects:

17. On Wednesday, evangelical Christian leader Jerry Falwell Jr. was tapped by President Trump to head an education reform task force. So I guess it’s safe to say, you can just skip that chapter on evolution, kids.

18. According to a new study, reggae music is the type music that makes dogs happiest. But just the music: 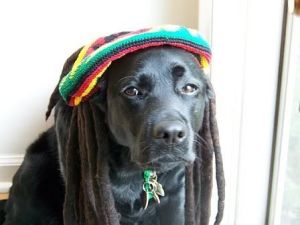 19. Nearly 50 years after her death, Judy Garland’s remains were flown from New York to Los Angeles by her family so she can be buried with her children and grandchildren. Said Judy, “Toto, I don’t know where the fuck I am anymore.”

20. English designers spent 200 hours weaving over one million strands of male chest hair together to create a fur coat, aptly named the Man-Fur Coat which can be bought for the price of $3900. Or, if you’re Serbian, for free.