1. Yesterday, the Ku Klux Klan officially endorsed Donald Trump for president. Presumably because they already have a Grand Wizard.

2. Yesterday, the Ku Klux Klan officially endorsed Donald Trump for president. Of course, they made the announcement with their hoods on because even they know to be ashamed of voting for Trump.

3. On Monday, Ohio Governor John Kasich said he wrote in the name John McCain instead of voting for the Republican nominee Donald Trump. He added that he would have voted for himself but he didn’t want to waste his vote.

5. According to a new study, the smell of pumpkin can cause sexual arousal in men. As a result, pumpkin patches have been forced to erect scare-mother-in-laws.

6. A new study has found that native English speakers are the world’s worst communicators. Apparently the study was conducted by talking to my wife and our therapist.

7. According to ‘the Hollywood Reporter,’ Disney is making a live-action version of ‘Snow White and the Seven Dwarfs.’ Which is weird, because I thought they already made that:

8. According to a new study, smoking marijuana may improve the user’s ability to see at night. Which will come in handy once you forget where the light switch is. 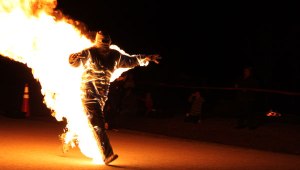 10. According to reports, no one has seen North Korea’s leader Kim Jong Un’s wife in over seven months. In response, President Obama called Jong Un “a ruthless dictator,” Secretary of State John Kerry called him “a man capable of anything,” and former president Bill Clinton called him “lucky.”