2. On Thursday, zoo officials announced that Bao Bao, the female giant panda, will leave the National Zoo in Washington, D.C. next year and move to China under a breeding agreement. Although, maybe Bao Bao would have gotten more action stateside if you stopped referring to her as a ‘giant’ panda.

3. Last week, a man in the U.K. had to have his penis amputated after getting it stuck for four days in bottle he was using as sex toy. But, on the plus-side, he now has a full bottle of shampoo.

4. Yesterday, a jury in Los Angeles found New York Knicks point guard Derrick Rose not guilty on accusations of rape. Proving right all those sports experts who said, coming out of college, Rose would be the next Kobe.

5. According to a growing body of evidence, exercise could improve erectile dysfunction. And, if that’s the case, please wipe off your machine.

6. Young Americans are so dissatisfied with their choices in this presidential election that nearly one in four told an opinion poll they would rather have a giant meteor destroy the Earth than see Donald Trump or Hillary Clinton in the White House. “Does the giant meteor have a running mate yet?” asked a desperate Chris Christie.

7. This week, M&Ms announced that they will be introducing a new flavor, M&M’s Caramel, which will feature a soft caramel center, covered in chocolate and a crunchy colorful shell. You don’t want to know how they are made: 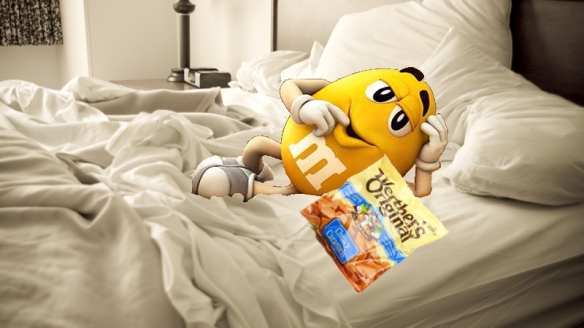 8. When Mike Pence was asked to respond to an 11-year-old girl’s questions about body image and female objectification, the Republican vice presidential nominee responded by talking about foreign policy. Not one to shy away from a question, Pence’s running mate, Donald Trump, gave her body an 8, but her face a 5.

9. Republican presidential candidate Donald Trump is calling for there to be a drug test ahead of the third and final presidential debate. And, in related news, can you do Gary Johnson a solid and pee in this cup for him?