1. After publicly supporting Hillary Clinton for months, reality star Kim Kardashian is reportedly now “on the fence” and is considering voting for Donald Trump. And although her vote remains unclear, one thing is for sure, that fence now has gonorrhea. 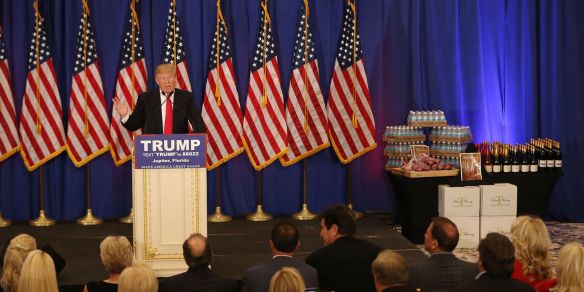 3. New England Patriots latest starting quarterback, third-string rookie Jacoby Brissett, could miss several weeks with a torn right thumb ligament suffered in Thursday’s win over the Texans. Ironically, the injury could have been avoided if the footballs were a little less inflated.

4. On Friday, Senator Ted Cruz announced that he was endorsing former rival Donald Trump for president. And, I gotta admit, that time before Cruz endorsed Trump was pretty scary because, for a couple of months there, I was proud of Ted Cruz.

6. A woman in Ireland, who was starting a new job, recognized her new boss because he sent her a dick pic on Tinder. Begging the question, how lax is that’s office’s casual Friday policy that she was able to make that connection?

8. Last week, a woman in Colorado was stabbed by her dog. Said the dog, “How bout, for a change, you do the begging.”

9. Over the weekend, messaging app Snapchat announced a new product called Spectacles that are sunglasses that record ten seconds of video. To summarize, the new product is something that is worn on the body, records what’s going on and then is quickly deleted, or, as they are known in Charlotte, police body-cams.

10. A transgender man in South Africa made history over the weekend by giving birth to child with his transgender wife. So good luck to those parents in coming up with a concise answer when that kid eventually asks where babies come from.