1. Archeologists have discovered a huge ancient monument in Petra, Jordan that they say was “hiding in plain sight.” And, looking back on it, it seems pretty obvious now:

2. A solar-powered airplane that has been circling the globe for the past year landed safely in New York on Saturday. “That’s crazy! I’ve never heard of such thing. It’s called a ‘landing’?” said Malaysian Airlines.

3. A judge who was censured for having sex with two women in his chambers handily won reelection in Orange County last week. Said the judge, “This calls for a celebration, everyone to my chambers!”

4. Last night, the Pittsburgh Penguins won the Stanley Cup and Hamilton cleaned up at the Tony’s. “Who did what now?” said fans of one of those things of the other.

6. SeaWorld’s beloved pilot whale Bubbles died last Thursday at the age of 30. Fortunately, Bubbles is in a better place now, anywhere but SeaWorld.

7. Over the weekend, Democratic presidential hopeful Bernie Sanders announced that he supports the District of Columbia’s push for statehood. So apparently this is Sanders’ new plan to get the nomination, start inventing more states to get enough delegates to win.

8. A researcher at the University of Pittsburgh accidentally infected herself with the Zika virus while working in a lab. And, even worse news, the virus is not deadly, so she’ll have to continue living in Pittsburgh.

9. A woman in Australia has been arrested after she left her two children aged four and six home alone while she traveled abroad. But at least she brought the kids back souvenir t-shirts that read “My mommy went to London and all I got was put into foster care.”

10. On Saturday, in an effort to keep free agent superstar Kevin Durant in state, Oklahoma Governor Mary Fallin promised the basketball player a position in her cabinet if he resigns with the Oklahoma City Thunder. Of course, fans will remember the last NBA player to have a position in a cabinet was Mugsy Bogues: 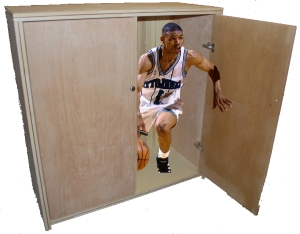